The research on the 17th Manchester has created a number of Eureka moments where new information is identified to complete a jigsaw or some particularly interesting anecdote jumps out of the blue.  For any other people researching their relative’s Service, you never know what you may find!  I am hoping to add to the following highlights.

Receiving Arthur Bell’s notes from cousin Roger is probably number one in the Hit Parade.  Extracts of Grandad’s notes entitled The Steel Helmet form the spine of the journal contained in the static pages of this site. THE STEEL HELMET | 17th Manchester Regiment on the Somme.

The Imperial War Museum Recording of Arthur Bell and Martin Middlebrook in 1976 was a revelation.  The Radio 4 interview is subject to BBC Copyright which means I cannot post the audio file.  It is wonderful for the grandchildren to hear grandad’s voice as a distant childhood memories.  Arthur’s son and daughter had even deeper reactions.recording (13672).

Making contact with the great grandson of Arthur Bell’s original Platoon Sergeant, Frank Chandler provides a wholesome continuity; particularly in the context of the 2014 Centenary.  Andrew Chandler’s transcript of his great grandfather’s interview provides a wonderful tale about the 2nd City Battalion’s original Regimental Sergeant Major stopping in every pub on the first march out to Heaton Park in September 1914.  The full story of this remarkable pub crawl is shown here Enlistment | 17th Manchester Regiment on the Somme.

2nd Lieutenant Ralph Miller is anticipated to have been in command of III Platoon at Trones Wood.  He and Arthur Bell went out to recover their wounded Sergant Major.  Ralph was later Killed at Guillemont Anniversary 30th/31st July 1916  Ralph’s niece has visited the site via the GUEST BOOK and its clear the reports on her Uncle are helpful.  It’s gratifying that this work helps remember some of the men.

IWM interview (11582).   This was really helpful to provide some new details of the 17th Battalion, particularly the assault on Trones Wood, where Albert was wounded.  Extracts of Albert’s interview are in Trones Wood | 17th Manchester Regiment on the Somme. 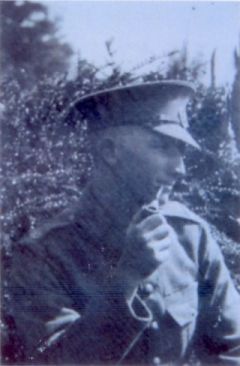 2nd South African Infantry correspond with Arthur Bell’s ‘Steel Helmet’ Journal.   It is certainly a pleasant idea, particularly now I have made contact with Iris Howe, the great niece of Vernon Edkins; who may have helped my Grandad carry the stretcher of a wounded Sergeant Major during the battle for Trones Wood.  South African Infantry helping Manchesters at Trones Wood | 17th Manchester Regiment on the Somme.

The patriotic fervor and sense of duty  that encouraged Arthur Bell to enlist also applied to his extended family.  Current research indicates all Arthur’s relatives survived.  However, the absent men from one family help us envisage the impact on the Home Front in the City of Manchester.  Other families suffered greater loss.

More to follow…. In the interim here’s some photos of a Western Front trip with the next generation Somme Tour

New sources welcome.  Please feel free to comment on any part of the site.