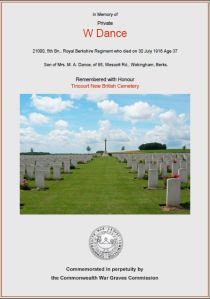 New Digital Records confirm the date for brave Berkshire men arriving with 17th Battalion Manchester Regiment in time for the battle for Guillemont.
The 2nd Manchester Pals were formed in September 1914 and retained their particular character as Clerks & Warehousemen from the city’s commercial businesses throughout their training and first taste of warfare in the trenches of the Somme. The first men to make a significant change to the profile of the Battalion were a draft of men from the Royal Berkshire Regiment (RBR).
The 17th Battalion suffered heavy lossess at Montauban and Trones Wood on 1st and 9th July. Reinforcements joined the Battalion from 10th July until the end of that month. Most of the drafts came from the 25th Training Reserve Battalion, which had been recruited from Manchester and surrounding towns in Lancashire.

The arrival of approximately seventy men from Berkshire on 11th July must have made quite an impact. Some commentaries – from other Battalions – are not positive about men joining from the southern counties. Having researched the losses of men from Berkshire at Flers, I feel it is appropriate to recognise the assimilation of the RBR men as part of the Manchester Pals. Many of the losses are recorded on other sections of the site. More palatably, the award of Military Medal to 43337 William Spratley from Earley near Reading (formerly 20115 RBR) can be highlighted to show how the Berkshire men made a positive contribution to the Manchester Regiment.
Numerous Service Records held at the National Archives illustrate a common theme for the arrival of the RBR men; including a particular document registering their new 17th Battalion numbers. This paper also shows a consistent departure of the group from Folkestone as 9th Reserve Battalion RBR and arrival in France on the first day of the Somme Battle, on the roll of 5th RBR. They were then posted to 46 Infantry Brigade Depot on 3rd July, before being placed on the roll of the 17th Manchesters on 11th July and transferred to the Battalion on 1st September 1916.
The arrival of the RBR men is inevitably missing from the Manchester Regiment CWGC records for the battle for Guillemont on 30th. It has been a challenge to find out whether the new draft were present, or solely on the roll, pending their arrival from Rouen. Finding their date of arrival assists in determining the extent  of the Berkshire troops contribution.
Many of the RBR men were older than the average recruit and the majority had been  Derby Scheme recruits, held as Reservists from late 1915; until being called up in late March or April 1916. Their arrival with the Manchester veterans, with two major assaults under their belts must have been quite a shock, especially when the Berkshire men had only had 3 to 4 months of home military training.
Was it really possible that the Army would throw these men into the storm of Guillemont without any true experience of warfare? The Berkshire men fought and died valiantly in later action, but were they just posted on the roll of the Manchesters for pay and training purposes on 30th July; rather than combatants?
With the unexpected plethora of Service Records for the RBR, I had hoped to find evidence of medical records for wounds on 30th July, but none have been found. This led to an assessment of casualty records of CWGC and SDGW for the last few days of July. 5th Battalion RBR were also valiant on the Somme, but their War Diary identifies no casualties, as the Battalion was held in reserve.
The first indication that men of the 5th RBR fought alongside the Manchesters is provided CWGC records for six men who lost their lives on the Somme on the 30th July. SDGW confirm these men were all killed in action, so they must have been serving away from their Battalion on the day of the Guillemont assault. 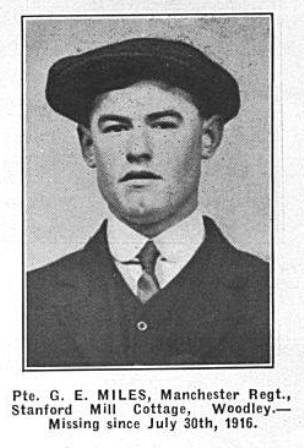 The majority of men from the Guillemont battle have no known resting place and are commemorated at Thiepval. One of the group is Private 20957 George Edwin Miles of 5th RBR.  The press report clearly indicates that George was serving with the Manchesters, but not the Battalion. CWGC and all other records solely refer to RBR service.

There are just one  known graves of 5th RBR men for 30th July, to provide a likely location for their death.

On Saturday 9th June, 1917, the Reading Mercury reported:
‘NOW REPORTED DIED OF WOUNDS Private William Dance, Royal Berks, who has been missing since July 31st, 1916, was on Saturday reported officially to his friends “died of wounds.” Much sympathy is felt for his parents, he being the second son they have lost in the war. Prior to his joining up he was employed at Messrs. Drake and Mount’s, Wokingham, and his parents live in Wescott Road’. Thanks to Wokingham Remembers

William is commemorated with his brother John on  Wokingham Town Hall Memorial and buried at Tincourt New Military Cemetery, almost 20 miles to the east of Guillemont and a long way behind the German lines. This provides initial thoughts that William could not have been fighting with the 17th Manchesters.
Fortunately the newly released CWGC digitised records quash such an idea. Original Imperial War Grave records show that Tincourt contains numerous graves of men that had been exhumed from their original resting place and concentrated in the new Cemetery. The digitised records also provide specific details that are not published elsewhere. This is a fantastic data-set that solves the riddle I have worked with for some time.
Each page will be introduced with grateful thanks to CWGC will be addressed in turn:- 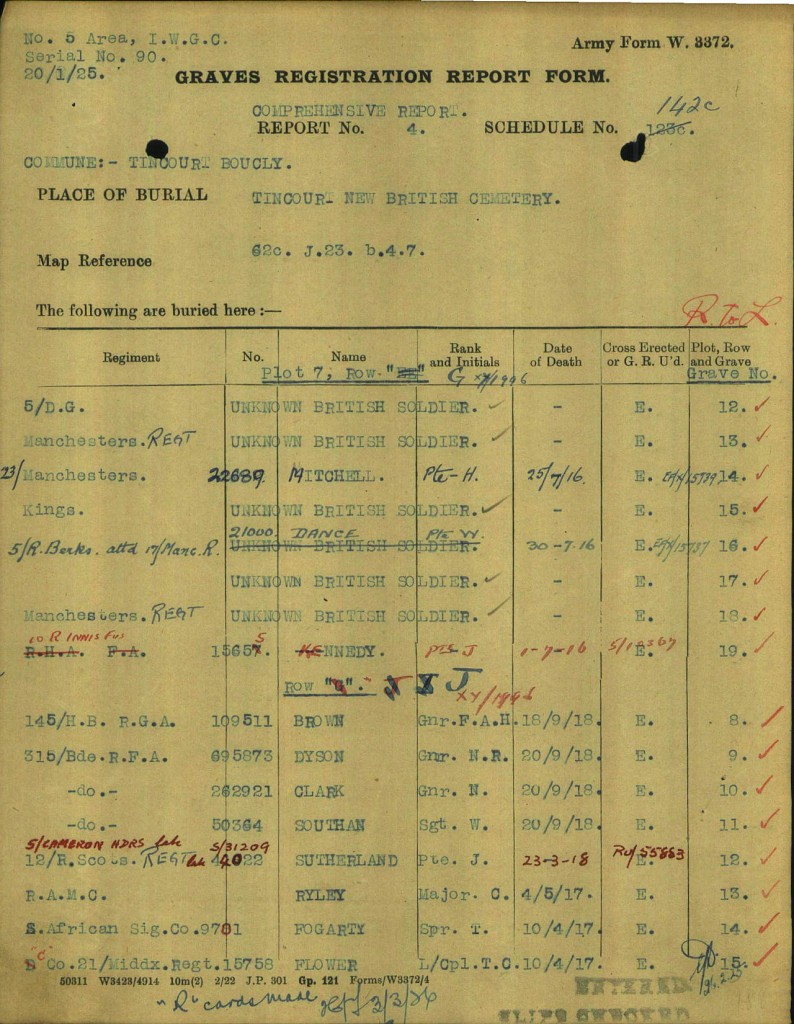 Original Grave Registration showing the progress in identification of William Dance. This shows William as serving with 5th Royal Berks and confirmed as attached to 17th Manchesters when he dies on 30th July 1916.

Grave Register. Uncertain date of death is noted, suggesting William’s death was not recorded by the 17th Manchesters. 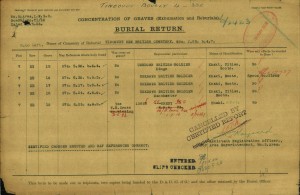 Concentration record showing William’s body was identified by the 21000 RBR number on his spoon. His original battlefield grave site is also shown as 57c. S.30. b.5.3. – A position close to Arrow Head Copse where the 17th Manchester were withdrawn on the afternoon of 30th July.

We now have confirmed evidence that members of the 5th RBR were attached to the 17th Battalion.  This is verified by the location of his original burial in the heart of the positions that the Manchester passed by on 30th July.

Many thanks to CWGC, National Archives, Manchesters Forum, Trevor Hancock, John Chapman and The Rifles Berkshire and Wiltshire Museum, Sorry if I missed anyone.