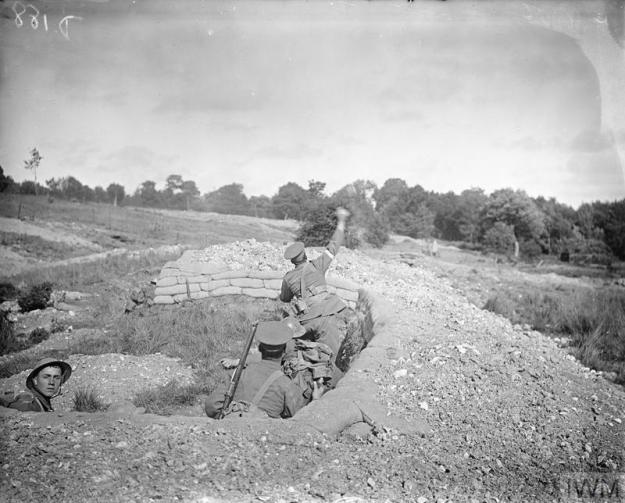 The troops were trained for a range specialist roles.  Arthur Bell became a bomber and trained with a variety of grenades.

“If we had any bombing lessons in England, prior to departure to France in November, 1915, I cannot recall them.  In the first lesson in France each man of the platoon – I don’t think we were selected- threw one live bomb.  We threw them from inside a trench (bounded by the traverse).  Over the top to a cleared space.  One of us, on pulling out the pin, let the spring force him to leave go of the bomb, and it dropped in the trench.  “Get round the traverse, quickly” shouted our

Platoon Officer, Lieut. M. [Robert Mansergh], at the same time rushing to pick up the bomb and haul it over the parapet.  Five second fuse, but great courage!  ” (1)

The bomber training continued and it seems to be have been some relief from general life at the Somme.  The War Diary recounts 1 Officer and 37 men joining a Brigade Grenadier Company on 18th November 1915.  Arthur Bell’s notes imply that he was not part of this unit, which was dissolved 10 days after its formation.  It is likely Arthur Bell’s main training took place in the Divisional Grenade School at Halloy les Pernois on 22nd December 1915, which was probably where the incident with Lieutenant Robert Mansergh took place, because this was general grenade training for all of the Battalion.  Further specialist trianing took place during April 1916 at St Saveur.

“The…week’s bombing course, two of us being selected from the platoon and sent some few miles to the rear, to a Divisional School.  We got regular rations, a full third of a loaf, and considered ourselves lucky.  The village was not too saturated either with our own troops, or any of the better-off Colonials.” 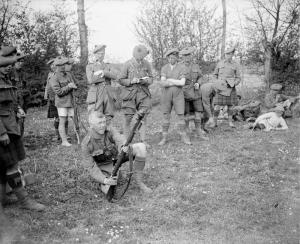 “We were taught how to throw the Mills bomb, practising on something like a long cricket pitch.  Demonstrations were held of the construction of several kinds of rifle grenade.  One in particular was attached to a rod which fitted into the rifle.  When the trigger was pulled a special cartridge sent the grenade into the air, whereupon vanes began to revolve, unscrewing a thread, and releasing a creep spring which caused the grenade to explode on contact.”

One of B Company’s Officers recorded throwing distances for his men.  Corporal W. Fox 9264 and Private Briarley of VII and VIII Platoons each managed forty four yards. (John Hartley)

“As you may have foreseen, it happened on one occasion that the two explosions came together before the grenade left the rifle.  Fortunately, no lives lost this time.”(1)

There were many stories of self-induced injuries and a damming conclusion of the overall benefits of British grenades.

“The Stokes Mortar is a handy weapon.  A hole in the rear end of it engages with a pin when the mortar slides to the bottom of a tube.  Like the rifle grenade, explosion sends the weapon on its way and there is a truly tremendous bang at the end of the flight.  Charlie W. [Possibly C F Wright 8954 VIII Pln.] who lived (still does I hope) in our suburb [Gatley], carries the mark of a premature, besides the other effect of his wounds, to this day.”

“A Sergeant of the Regular forces instructing the Home Guard at Heaton Park.  “Now it’s quite safe, I can put it on the table.”  Bang!  Fatalities and casualties, and disfigurement.”

“I suppose it would be impossible, even if it were desirable, to compare the damage done to ourselves with that done by bombing to the enemy.” (1)

We also find commentary on the German bombers who became familiar opponents later in France.

“Their hand bombs, which we called spud mashers, with streamers and seven second fuses, were similar in appearance to one type of our contact bombs.”

1 thought on “Specialist Training – The Bomber”