The British soldiers endeavoured to consolidate their positions, despite continuing artillery and machine gun fire.  Acting OC, Major MacDonald reported  in the War Diary “Hostile MG fire was opened on the village immediately on our entry and about 2pm a heavy bombardment of 15cm and 77mm was opened on the town, which continued almost without cessation until the battalion was relieved 40 hours later”. 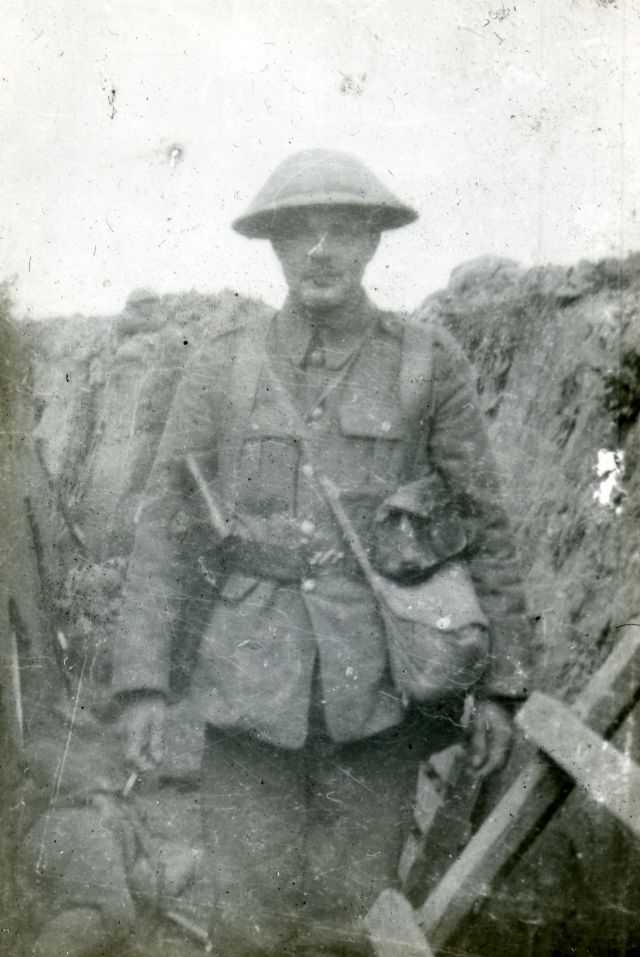 2nd Lieutenant Harvey of [16th Bttn] in Montauban Alley taken around 12.00pm on the first of July 1916 by Tony Nash.  It is interesting to see the relaxed Officer smoking a cigarette and wearing Other Ranks uniform, to avoid being a target for defending snipers and machine gunners. Note the sentry on watch in the background, the man resting at on the ground and the German dugouts in the left (south) side of the trench.  The men of 16th Bttn had reversed the parapet, built new fire steps and reinforced defensive positions before they were ordered to rest. A trench ladder can be seen in the foreground and a section of duck board has been lent against the side, for comfort.  The trench looks in remarkably good condition, considering it had faced a week long bombardment.   This was clearly beneficial to the new defenders over the next 36 hours.  While the caption states the time as midday, it is thought that 2nd Lt Harvey has moved up to Montauban Alley later in the afternoon, to reinforce the only two surviving 16th Bttn front line defences. It is also clear that the German artillery had not yet started any bombardment on Montauban Alley. See Note 1. below © Manchester Regiment Image Archive (MR02794)

Lt Callan-MacArdle wrote “Immediately, we started to consolidate, working like demons. In a short time, scraps of information were coming in from other companies and particulars of our losses. Vaudrey and Ford killed, Kenworthy wounded, the Colonel last seen in a shell hole with the M.O. in attendance…  As there was no available dug-out in B Company’s side (the East) of the village, Humphrey, who took over when Vaudrey was killed, had his HQ in a shell hole.”

“We instructed our men to dig holes for themselves under the parapet of Nord Alley, which was about 8 feet wide, but first they had to make fire steps. The trench became littered with dead and wounded. The dying called for water, but there was none. Those in agony asked pitiably for stretchers, but 8 stretcher-bearers had been killed, three stretchers out of four destroyed and the doctor overwhelmed by work. It was, of course, impossible to spare a sound man to help along a broken one as we were standing to for a counter attack. It came; was repulsed and came again and the regiment was crumbling away.”

The enemy artillery, having been badly damaged, did not greatly interfere with the work of evacuation of wounded, bringing up of supplies and consolidation which now began in earnest. However, enemy shellfire falling on Montauban Alley, the village defences and on the old no man’s land intensified and stayed heavy, causing many casualties and making relief and re-supply very problematic for the tired units now holding the new positions.

Major Macdonald’s entry in the War Diary continued “Parties were set to work at once to consolidate Strong points & the perimeter.  The digging of trenches was very difficult owing to the fact that the village was a mess of shell holes & loose crumbling earth.  The total inadequacy of trenches in such a soil was abundantly proved in the next 48 hrs.”  He continued “Practically no dug-out shelters were available for men & casualties were heavy from the commencement of the bombardment.  The enemy was making accurate observation of the village during the whole of our tenure of it & his shooting was extraordinarily good.  No sooner did a working party commence to work on a new bit of trench then shells rained upon them.”

During the German bombardment of the newly won British line, 8361 Private Albert Alton of A Company’s I Platoon was recognised for bravery with the award of a Distinguished Conduct Medal. His citation reads “For conspicuous gallantry and devotion to duty. During a heavy bombardment a trench was blown in several places and several men were buried. He at once started to dig them out under a very heavy fire, and rescued two men single-handed. He behaved in a most cool and courageous manner throughout the bombardment.”

C Company under the command of Captain Madden with Lieutenants Heywood,  Sproat and Stevens were next to A Company, developing positions facing Longueval and Bernafay Wood near Strong Point C. Lieutenant Sproat was killed by German artillery fire after his (X) Platoon had been spotted constructing  a new trench.  Major Madonald’s notes recount “The first arranged line on the E Side of N1. was found to be untenable as it was commanded by direct enfilade from the high ground S of BAZENTIN LE GRAND & a new line was taken up to the W of N.1.

D Company were located to the north of the village near Strong Point B, overlooking the German retreat to Caterpillar Valley.

Following the difficulties of improving defences in the daylight, the Battalion War Diary reports continuing challenges after nightfall on 1st July.  “At night when work was able to proceed unobserved the eastern side of the village was shelled with impartiality & was searched from N to S in a very thorough fashion.  Evidently the most methodical arrangement had been made for rendering the village uninhabitable – special attention being paid to strong points B [D Coy.] & C [C Coy.] and the middle of the orchard on East Side”

Progress was made and positions established for the Battalion support.  Major Macdonald recounted “Bn Hqrs. were established in well constructed dug-out just south of strong point B. and a dressing station in a good cellar just in rear.  Fortunately both these shelters withstood the bombardment.”

Major Macdonald also recognised the absence of planned support from members of 202 Field Squadron, Royal Engineers (RE) who were intended to assist with the construction of defences.  The RE Special Brigade was instrumental in the success of the attack due to the provision of smoke screens in the assault and it is recognised that 202 Field Company maintained rear telephone wires and rebuilt roads very soon after the village was taken.  As such, it’s likely the RE numbers were so  depleted, they couldn’t meet all their planned objectives.

Major Macdonald praised the British artillery support and realised the benefit of airborne observers. “Barrages were always prompt & effective.  It was noticeable that when an aeroplane was making observations enemy’s artillery fire almost ceased.  This gave us two lulls of 1/2 and hour each in the course of our tenure of the village.  Possibly if an aeroplane had been kept on continual observation casualties might have been reduced & hostile batteries might have been located.”

As the village defences were consolidated the wounded men from the Brigade endeavoured to find medical aid and made their way back to Casualty Clearing Stations.  Scout Sergeant Bert Payne (IWM Interview) recounted dreadful scenes and situations as he made his way the rear from the approaches to the village.  “There was ¼ million casualties that day. If you could imagine a building site without all the bulldozers”  Bert described the scene of a severely wounded British soldier.

© Manchester Regiment Archives (MR02796) Men of the 16th Battalion resting in Montauban Alley. Lieutenant Nash described his men working like trojans to prepare Montauban Alley for the inevitable counter attack.  They did this work soon after their arrival and constructed a north facing parapet, platforms and a fire step.  This newly constructed fire step appears to be shown on the right hand face of the trench face.  A shovel is leant against this trench wall, with a pick axe opposite.  Beau Nash also mounted sentries and insisted his men catch up on some sleep.  It seems a little strange that the men reclining in the bottom of the trench didn’t take advantage of the dugouts, although perhaps they were already occupied.  The sleeping soldiers have taken off their packs, but the man in the foreground retains his bayonet.
Montauban Alley was positioned approximately 200 yards in advance of the north side of Montauban.  17th Manchesters manned many of the village defences and reported hostile machine gun fire as soon as they arrived at their objective.  Their War Diary also recounted a heavy German bombardment commencing at 2pm.
Photographs of Montauban Alley with men sleeping in the trench, or sitting in open positions without helmets, confirms there was no immediate bombardment of this position.  The sniper and machine gun fire would have been cracking over their heads, although this will have been familiar and unthreatening to the men, who had spent some months in the Maricourt trenches.  Nevertheless, the sentries needed to keep their heads down and the opportunity for rest diminished when the German barrage hit Montauban Alley later in the afternoon.

© IWM (HU 112462) Photograph taken on July 1st 1916, the first day of the Battle of the Somme. In Montauban Alley, the final objective of 55th Brigade – taken about 6pm.  This is a group photo, featuring seventeen men, who had finally gained their objective of Montauban Alley.  The condition of the former communication trench is significantly worse than the section occupied by the 16th Manchesters.  This will have been due to the extended British bombardment of the 55th Brigade target positions; or possibly the counter-measures by the German artillery.  The fire step seems to have been built to the right side of the photograph and the exhausted men will have been longing for a drink, food and an opportunity to sit down.  The group appear more exhausted, than  jubilant; after their extended ten hour assault.
One hundred and sixty men were killed serving with the 7th Battalion, Queens Royal West Surrey Regiment.  There were only twenty eight equivalent losses for the 7th Battalion, West Kent Regiment.  Both Battalions had numerous men wounded in the action.

2nd Lieutenant George Macdonald Harvey was originally a Private (1194) in the 1st Battalion Honourable Artillery Company, embarking for France on 18th September 1914.  He returned Home on 8th June 1915, probably due to wounds.  He was then Commissioned 2nd Lieutenant on 30th September 1915 (London Gazette 15/10/1915), posted to 24th Manchesters and then joined 16th Battalion on 26th April 1916.
The War Diary shows George still serving in D Company at Trones Wood, where he was wounded on 8th-10th July 1916.  After recovery he was wounded again near Heninel in April 1917. His Medal records show George had been promoted to Lieutenant and discharged with wounds or illness on 25th May 1918.
George had been born in Woodside, Surrey in 1886 and lived in Chelsea in 1920.  Prior to the War, George had been a member of the London Stock Exchange. His father was a Bank Manager and the family lived in Weybridge, Surrey.  George died on 2nd August 1965, when he was resident in Baker Street, NW1.

5 thoughts on “The Defence of Montauban”