The Battle of the Somme was a major offensive for the British Army in France.  It was also seen as the first opportunity for many of the Pals and Chums of the New Army to prove themselves in combat. The 17th Battalion’s preparation, assault on the village of Montaunban, defence of the hard won positions and later relief can be found at:-

Preparation for the Big Push

The Defence of Montauban

Preparations for the Big Push 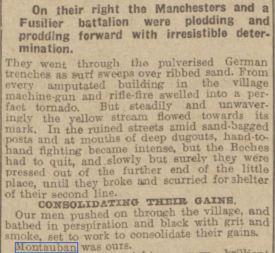