The Manchester Regiment Group’s albums on Flickr project for collating grave photographs continues to produce fresh information and background on the men who fought in the 17th Manchesters. Robert Ramsey helps illustrate the men who joined in the Battalion during mid July 1916 as drafts to replace extensive losses from Montauban and Trones Wood.  The date on the Grave inscription is inaccurate as confirmed by this research:-
Robert attested 10379 in the Royal Fusiliers on 5/12/1914, as part of Lord Kitchener’s recruitment drive. He had been a Labourer, resident at 119 Marks Road, Romford with his wife Daisy and daughters Dorothy & Florrie. His Mother, Elizabeth and Father, William lived at 50 Willow Street, Romford. The couple had seven other children.
Following basic training with 7th Battalion at Hounslow, Robert went on to serve in the Mediterranean Expeditionary Force. He arrived (probably Galipoli) with 2nd Battalion Royal Fusiliers on 10/5/1915. He returned Home wounded on 5/12/1915; and following treatment in the York Military Hospital, Robert spent Christmas at home with his family on furlough from 21 to 30/12/1915. On 9/2/1916, Robert returned to hostilities with 8th Battalion in France. He received a Gun Shot Wound in the arm on 11/4/1916 and returned Home on Hospital Ship St David, arriving 4/5/1916 and received treatment in Huddersfield War Hospital. There was a Court Martial – sleeping on duty – at this stage and Robert’s sentence was commuted and he was required to return France with 5th Battalion, where he arrived posted to 32nd Battalion on 28/6/ 1916. Having arrived at Infantry Brigade Depot, Etaples the next day, he was then attached to the 17th Manchesters as part of a draft of 438 troops who arrived on 12/7/1916. In common with many of the July draft, he was then transferred to the Battalion – 43365 – on 1/9/1916.
Evidence of other men who were attached to the 17th Manchesters*1 indicates Robert will have taken part in the assaults at Guillemont (30/7/1916) and Flers where he will have joined the assault on 12/10/1916 and was wounded again on 14/10/1916.

After recovery in France, Robert was then wounded, serving with D Company at Neuville-Vitasse, as the Germans withdrew to the Hindenburg Line. The Medical Records suggest Robert was wounded at Neuville Vitesse on 5/4/1917, but the War Diary reports the Battalion at Blairville on this date. Robert was hospitilised in Wimereux before evacuation to Britain on Hospital Ship Princess Elizabeth, arriving 12/4/1917 when he was admitted to the Norwich & Norfolk Military Hospital with Gun Shot Wounded and internal haemorrhage.

After treatment for 5 days, Robert succumbed to his wounds during an operation on 18th April 1917.  He is buried in Romford Cemetery.
After Robert’s death, Daisy remarried and she went to live with her daughters at 14 McAlpine Street, Anderston, Glasgow.
Notes
*1
Many men from Royal Berkshire Regiment were attached to the 17th Manchesters in mid July 1916 and went on to fight at Guillemont on 30/7/1916. This research has led to the identification of CHRISTIAN GRAYSMITH who died in the assault posted as 32nd Royal Fusiliers, but recorded by CWGC as attached to 17th Battalion. 19 year old tea packet from Blackfriars, Christian was originally buried on the battlefield close the railway line leading east from Trones Wood, before his remains were relocated to Serre Road in the 1920s.  His Medal Roll confirms arrival in France on 28/6/1916 in the same group of reinforcements as Robert Ramsey.  The Roll also confirms attachment to Manchesters.
DoB 26/2/1988. Marriage to Daisy Catherine Box 5/6/1910. Daughters Dorothy Violet (DoB 12/7/1911) & Florence Esther (DoB 24/7/1913)
Evidence used:-
1. Service Record
2. SDGW
3. Medal Roll
4. CWGC
5. 17th Battalion War Diary. 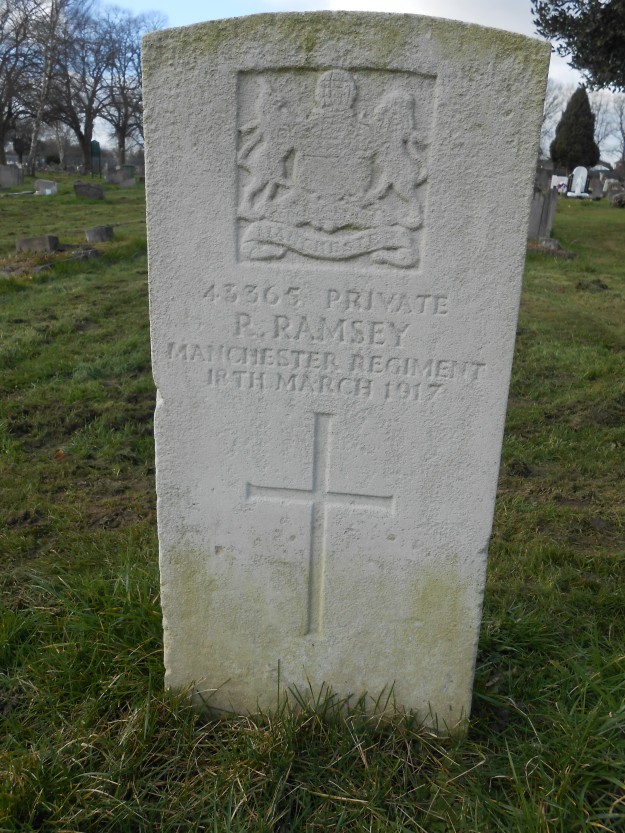 The original headstone that was replaced by the featured image in 2016. 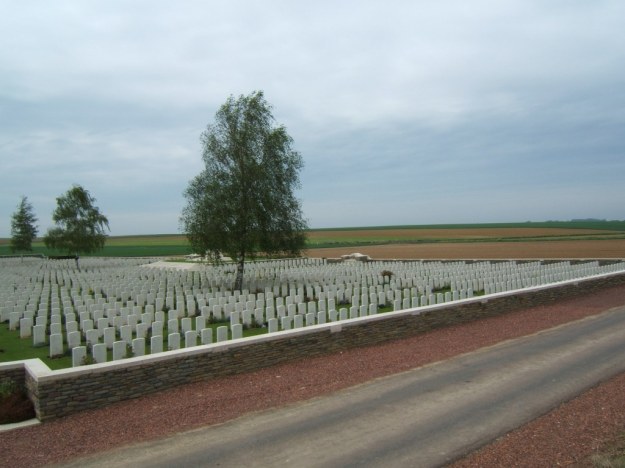 On 12th October 1916, the 17th Battalion took part in a disastrous assault on German positions north of the village of Flers.  Some advances were possible, but all progress was conceded in the face of relentless machine gun defences from the German Marines.  Arthur Bell – who provides a large part of the narrative on this site – was wounded at Flers and in common with many of his peers, his active Service ended on this day.   The anniversary also marks the end of the Battalion’s main action for the year.  They want on to further significant deeds in 1917.

The majority of 17th Battalion’s casualties in the summer of 1916 had enlisted into the Manchester Regiment during 1914; or early 1915. The troops  who were killed, wounded and captured in the assaults in July 1916 left very few ‘original’ Warehouseman and Clerks behind.  Sixteen of the ‘original’ Pals died on 12th October 1916 and a total of twenty members of this group died in that month.  The profile of the 12th October casualties are provided in this post.

The casualty list provides an illustration of the replacement drafts, from Manchester, Lancashire and much further afield.   713 men had joined the 17th Battalion in July 1916.  The few Service Records remaining for men who died in October 1916 enables there to be some extrapolation to assess the likely make up of the troops that replaced the original pals.

Personal accounts recount the changing nature of the Battalion when the first draft of men arrived in mid July.  The unique status of the clerical workers was the first element to change when men arrived from the Manchester Regiment Reserve Battalions.  Men attached to the Battalion with service number commencing 30000 are likely to have formed the first element of the July 1916 draft.  There were no casualties in this number sequence before 10th July and these men are likely to have been attached from the 25th (Reserve), or Territorial Battalions.  As such, the majority were Mancunian born or resident.  Nineteen of the October Roll of Honour were part of this group and 16 died on 12th July 1916.

Fourteen casualties numbered 43131-43246 were attached to the 17th Battalion, having transferred from other Lancashire Battalions, although one man was from Newcastle.  Some of these men were returning to service after wounds and others had newly arrived in France after serving as reserves with their original Regiments.   Eight of these Lancashire men died on 12th October.

Sixteen remaining men on the month’s Roll of Honour had transferred from other county Regiments; directly from reserve battalions, or recovering from wounds; none of the subsequent number sequence had been present at Guillemont .   Ten of these men (2 assumed with Berks. connection)  43271-43339 had transferred from the Royal Berkshire Regiment; eight died on 12th October.

Four of the group (1 assumed) had served with the Royal Fusilier, one with the Royal Sussex and one transferred from the Middlesex Regiment. All of these men died on 12th October.

Records compiled from CWGC, SDGW, Census, Service and Pension Records. Significant nuggets also obtained with thanks from  http://www.themanchesters.org/ and members of http://themanchesters.org/forum/index.php & http://salfordwarmemorials.proboards.com/

Officer casualties include C Company OC, Captain MacDonald Warriner Brown of Dane-in-Shaw 13 Elms Avenue, Lytham, Lancashire, aged 26.  His Widow was Jean Warriner  Dodds, after she remarried.  MacDonald is commemorated at Thiepval and at home in Cirencester Parish Church and Grammar School Memorial, Bingham Hall, Cirencester.  He had been born in Penarth in 1890. Please See Henry Kay Evans . A Master at North Manchester School, he joined the staff of the School in 1910, and joined the Public Schools Battalion in Nov. 1914. Granted a commission in the 17th Manchesters in 1915. He was grenade instructor, and only a fortnight before he fell he was made Captain. Quite recently CO, Colonel Johnson, remarked to another officer how splendidly Brown was doing, and how it was a certainty that he would get speedy promotion and honour. Who that heard him talk to the Natural History Society on the birds of the Fens, or of the Cheshire meres, will ever forget him? He was just at his best then, and would give, from his fascinating stories connected with the pursuit of his favourite hobby.
“The memory of his generous, sunny nature and of the healthy influence he exerted among all who worked with him, will long be treasured.”