“I felt that it was my duty to join up”

Allan Arthur Bell was born in Manchester in March 1894.  His father Richard was a calico salesman employed for almost 20 years with Messrs Richardson, Lee, Rycroft in the city’s cotton industry. Arthur’s mother, Mary Ann (nee Grindley), known as Polly, had three children; a daughter Dorothy, known as Dolly and two sons, Allan and Richard.  At some stage, the boys adopted their second names of Arthur and Douglas.  The family lived at 12 Hankinson Street, Hulme when Dorothy was born in April 1892, moving to 80 Duke Street, Hulme, when Arthur was born on 13th March 1894.  Two years later they family had moved to suburban Barton when Richard was born in November 1896 and New Road Eccles when to the Census was taken in Spring 1901.

Despite their relative middle class status, the children sadly lost their father Richard in October 1901, aged 32.  Tragically his widow, Mary Ann, died eight years later at the age of 39, in September 1909.  The children were then orphans, aged  16, 15 and  12.  Mary Ann is buried at St James Church at Birch in Rusholme and had been living at 45 Brindle Heath Road, Pendleton in Salford when she died.

As part of a contributory scheme, at seemingly one Guinea per annum, Richard senior had provided for his childrens’ education and wellbeing.  They all attended Manchester Warehouseman and Clerks Orphans’ School.   This was a boarding school in Cheadle Hulme (Also see Cheadle Hulme School – Heritage Day) , attended by fee payers and fortunate orphans – such as the Bell children – who had lost their father or both parents.  Now known as Cheadle Hulme School, detailed archives [for which I am hugely grateful] provide details on the pupils attendance and background.

Dorothy was elected in August 1902 when her family were described as supported grandparents at 103 Park Street and then 9 Hall Street, Greenheys when she was admitted.  One of her Sureties was uncle William Bell.  She left school in the summer of 1907, having won a gold or silver watch as a winner of the prestigious John Rylands Prize for 1906.  At the time of the 1911 Census she lived with her Aunt Isabella in Chorlton on Medlock, being employed in the County Council as a student teacher.

Arthur followed his sister to the school in January 1902 and left seven years later at the end of the summer term in 1909, winning a silver watch for the Duncan Matheson prize of 1908/09.  Arthur was also awarded books for his exam successes.

His mother died a few months later.  Arthur’s sureties are listed as John Henry Fryer of 47 Webster Street, Greenheys and William Nall of 11 Delhi Grove, Greenheys.  Mr Fryer was a Master Baker / confectionery who went on to live in suburban Timperley by 1911.  Mr Nall had been a boarder with Mr Fryer, employed in the bakery warehouse at the time of the 1891 Census.  By the time of the 1901 Census, Mr Nall had married Josephine Moorey and had his own daughter.  Earlier Census data indicates Mr Nall had lost his father as a child and it is possible he was a former pupil of the School.  There is no known family connection with these benefactors. 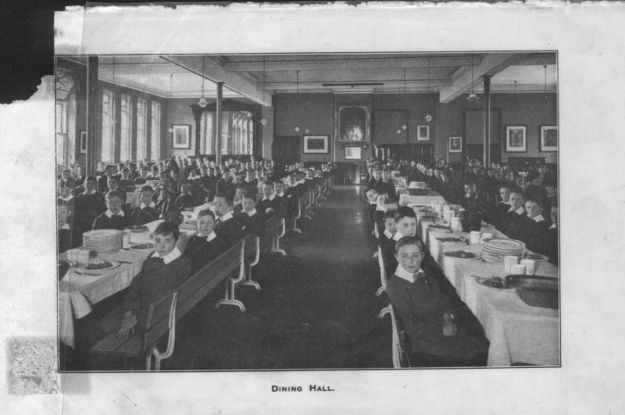 Courtesy Cheadle Hulme School.  Douglas may be shown in this image of the boys of the Warehouseman and Clerks Orphans’ School

Douglas  was elected to the School in May 1908 and was admitted on October 19th 1908. His Sureties were Edwin William Wheeldon of Heaton Chapel and William Nall of Greenheys. Presumably the reason that he didn’t attend the School until he was 11 (almost 12) while Dorothy was 10 and Arthur was 9 (almost 10) when they were admitted was because it was school policy to only have two Foundationers from the same family at any one time, so he will have had to wait until his sister had left. The leaving age was 15 at the time. He left Midsummer 1912.  The reasons for Mr Wheeldon’s support for Douglas are unknown.  He was a Pawnbroker and watchmaker / jeweler who had been born in Cheadle in 1851.

In the spirit of reciprocation detailed records have been compiled of the WACOS ‘family’ who lost their lives during hostilities. Warehouseman & Clerks Orphans’ School War Memorial – Roll of Honour Four casualties are found to have been missing from the Memorial Plaque.

Arthur Bell was a keen sportsman, including swimming and cricket.   In 1909 he was awarded a silver medal for lifesaving from the Humane Society for the Hundred of Salford. His fellow swimming medal winner, Leonard Mortis died in Mespotamia on 19 July 1916, serving as Driver 12387 with 66 Brigade Royal Field Artillery. Edwin Youill survived hostilities, serving as a Corporal with 1/1st E Lancs Field Ambulance ( Territorial RAMC) at Gallipoli and France.  Leonard Lawton Taylor served as a Sergeant in 19th Battalion.  Captured at Guillemont on 23/07/1916, Leonard was demobilised in 1919.

Arthur was medium height and his stature reflected his active life.  He had sandy hair, presumably reflecting his Scottish ancestry. 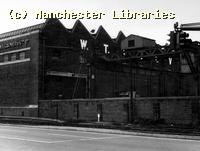 In holidays and after his school years, Arthur lived with members of his mother’s family, the Grindley sisters and their husbands.  In 1911, he was seventeen years old.  Benefiting from good schooling he was employed as an assistant book keeper in a sports outfitters.  He lived with his mother’s sister, Aunt Lily and her husband Ernest Wissel who worked as a waiter in one of Manchester’s restaurants.  There were a number of sports outfitters in the City.  W Atkinson & Sons was one such example.  They had a strong trade in bicycles and presumably sports clothing.  They were also gunsmiths.

After the commencement of hostilities Arthur lived with another of his mother’s sisters Gertrude Donnison at 6 Warrener Street, Sale.  Alternatively he may have specified Auntie Gertie’s address, with his actual address (written in the cover his Small Book) being close by at 21 Temple Road, Sale. Private 8241 Alec Mitchell was a neighbour of Auntie Gertie’s at 4 Warrener Street.

“Oh, I felt that it was my duty to join up and I felt that if we did have a war, well; my duty, along with a lot of others was to join up.  I felt that; we hadn’t been the ones that had started the war at all.”(2)

Teutonic Braggarts! – Not my Great Great Uncle © THE BRITISH LIBRARY BOARD. ALL RIGHTS RESERVED

© THE BRITISH LIBRARY BOARD. ALL RIGHTS RESERVED. Pressure on Uncle Ernest as a waiter on the 1st day Arthur Bell tried to enlist. 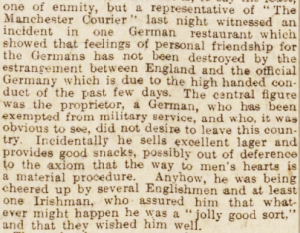 It is worthy to note that Uncle Ernest, who had kindly provided a home for Arthur, had been born in Hanover, Germany.   Ill feeling towards the German community in Manchester grew very swiftly and most men were arrested – somewhat for their own safety.  It is anticipated Uncle Ernest was interned on the  Isle Of Man or Lofthouse Camp, near Wakefield (where another Manchester based German citizen was interred) during the war and believed he and Aunt Lily relocated to Germany in the 1930s.  The couple had been close to the Bell family, with Lily’s sister, Arthur’s Mother, Mary Ann Bell signing the Wedding Register when Ernst and Lily Grindley married in 1905 – possibly as a widowed maid of honour, with her three children in attendance.

For details of the School’s Commemoration, please see the War Memorial page.

1 thought on “One Recruit”