This post commemorates a man who died in 1920, due to Tuberculosis he had contracted in the Army.  Identified as an omission with the Manchesters forum, the research has produced a package of records that In From The Cold Project are using for George Conduit to be recognised as a casualty of the Great War.

George Conduit enlisted in the Manchester Regiment, receiving number 26530, on 5th June 1915. He had previously served for six years in the 8th Territorial Battalion (Number 706) and was 38 years and 3 months old.  George was relatively tall, at 5’ 9 1/8”.

In civilian life, George had been employed as a General Gardener / Excavator and lived with his family at 16 Gardens Walk, Hyde Road, Ardwick. George was the son of James and Lousia Conduit.  He had been born in 1877 and had worked as a Labourer for Manchester Corporation in 1911. He had married Edith Cotter at St Philip’s Church, Ancoats in 1898.  The couple had two daughters.  Edith had been born in 1902 and Agnes followed in 1903.

George was posted to the 19th Battalion on 8th June 1915.  The Battalion was then training with the other City Battalions at Belton Park near Grantham.    He was posted to 26th (Reserve) Battalion on 13th August.  This change may have related to sickness, injury, general fitness for the rigours of training, or solely due to the lack of training as a result of recent enlistment.  26th Battalion was based in Altcar, near Southport and was a Reserve unit, training men to be drafted to the City Battalions.

George was transferred to 1st Garrison Battalion as an unpaid Lance Corporal on 4th February 1916.  The Garrison Battalions were manned by troops who were unfit for the front line, but healthy enough for general military duties.  George embarked for India on 25th February 1916.  Having arrived with 1st Garrison Battalion he was found guilty of some misconduct.   He lost his stripe on 14th March 1916, reverting to the rank of Private.  George remained in India until 23rd July 1918, when he arrived in Singapore.  He subsequently departed Singapore and arrived Home on 7th April 1919.

George was transferred to Reserve on 3rd May 1919 and received a Pension for Pulmonary Tuberculosis (TB), due to his service, with 100% disablement. He died at home, at 16 Gardens Walk, Ardwick on 12th December1920 aged 43. His death was caused Pulmonary TB and he was buried in Manchester Southern Cemetery on 18th December 1920.

Edith received a Widows Pension of 20/ per week, commencing 15th December 1920.  The family continued to live at Gardens Walk.  Edith also received a British War Medal for her late husband’s overseas service.   George was not entitled to other service medals, as he had not served in an operational theatre.

It appears Edith may have also received the Victory Medal and 1914/15 Star and records inaccurately refer to service at Gallipoli with 8th Battalion. It is possible George was entitled to these medals if he stopped in Egypt on route to India.

In common with many men who died after discharge from the Army, George’s grave was not commemorated by the Commonwealth War Graves Commission.

The cause of death was confirmed by George’s Death Certificate and an Application is being made, through the Ministry on Defence, for George to be categorised a casualty of the Great War.  If / when this is successful, the case will be passed to the Commonwealth War Graves Commission and they will accept George’s burial into their care. 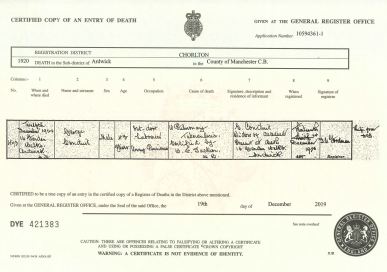 Sources for the research

Thanks for invaluable help from:-
In From The Cold Project
Manchester Regiment Forum
Salford War Memorial Project