George Dean was the son of Tom and Annie Dean, of 21, Ashfield Rd., Rusholme, Manchester. He had been born in Manchester on 22/7/1897 and was 19 years old when he died. Tom was a printer.

Kenworthy The Sphere 26.8.1916 © THE BRITISH LIBRARY BOARD. ALL RIGHTS RESERVED

Captain Stanley Kenworthy’s Service file includes a paper from the War Officer recording George as the informant “Before we reached the first German line, I saw Capt. Kenworthy – fallen – he wasn’t dead then. I was close to him…. a little later I heard a messenger come up to Lieut. Whittall and say the Capt. was dead — and he was to take command of the Company. We held Montauban” George is identified as a member of D Coy in Fulham Military Hospital and the report is dated 14th July.   George’s statement indicates he had been part of the the Battalion as they liberated Montauban and he was probably wounded in the subsequent 36 hours as the Manchesters defended the village against counter-attacks and continuing German bombardment.

George had originally joined IXX Platoon of E (Reserve) Company and must have been transferred to D Company before he disembarked in France on 8th November 1915.

George’s younger brother was Arthur Kenneth Dean. In common with George, he was too young for overseas Service. George was still 18 at Montauban, below the minimum age of 19.

He died on 12th September and was buried at BIRCH-IN-RUSHOLME (ST. JAMES) CHURCHYARD. He is now Commemorated on the Southern Cemetery Screen Wall, although it’s possible his addendum entry has not yet been added. 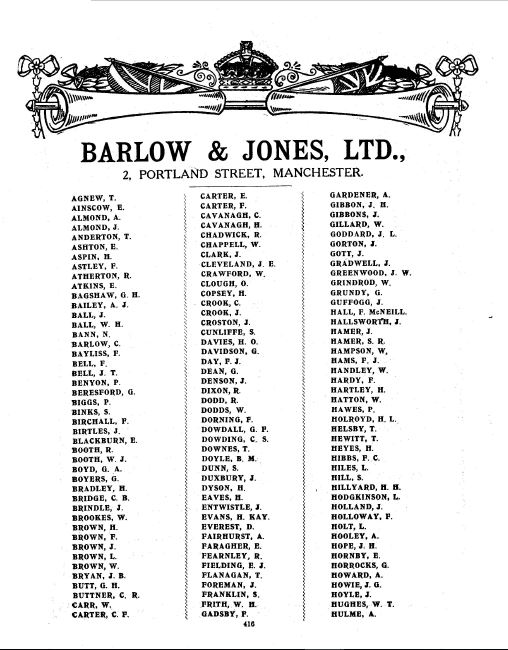 G Dean noted on the Barlow & Jones Roll of Honour