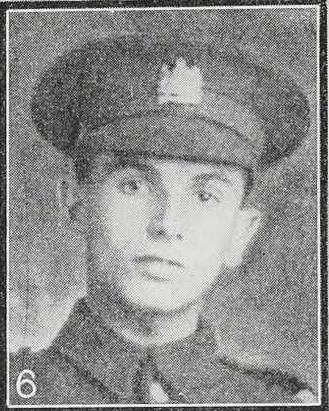 Maurice Sugarman was killed in action at Guillemont on 30th July 1916.  He was originally buried alongside his comrade, Private A Clifford, in a field north of the village near the railway station.  Their remains were later relocated to Delville Wood Cemetery in Longueval, less than a mile north from the original grave.

Very little is known about Maurice’s life, but the photo places a face to his name.  As one of the few Jewish men to be killed serving with the Battalion, there are also some extra resources to address.  It is certainly uncommon to see a Star of David on a 17th Battalion grave.

Maurice was born in Manchester in the 4th Quarter 1895.  His parents Abraham and Jane had both been born in Russia and it seems the initially Registered their second son’s name as Barnet. The 1901 Census changed this to Morris Barnet and Maurice in 1911.  There were five children in the family, including brothers David & Simon / Sydney and sisters Carrie Annie and Rachel.

Abraham was a silverware shopkeeper and absent from the family home on the 1911 census.  It is possible he was then resident in New York. Maurice was then working with his brother David, as waterproofer, at a garment maker.  The family lived at 278 Rochdale Road.  Maurice’s home address was given as 18 Woodland Terrace, Higher Broughton in 1915 and 142 Elizabeth Street, Cheetham / Hightown in 1917-20.

Maurice had been employed as a Linen Dealer, when he enlisted in the Regiment in the Depot at Manchester on 7th August 1915.  He was 5′ 3 1/2″ tall and weighed 116 lbs.  Medical notes indicate that Maurice had acute flat feet and he was originally recommended for discharge and then posted for Home Service.  Maurice joined the 3rd Battalion Manchester Regiment on 21st August 1915 and will have completed his basic military training at the Humber Defences at Waltham near Cleethorpes.  Maurice was charged with Abscences on three ocassions, Detained for 16 days and confined to barracks for 3 days.

Maurice embarked for France on 3rd July 1916 and he was posted to the 30th Infantry Brigade at Etaples on 4th July.  Maurice was posted to 17th Battalion in the field on 17th July as part of a draft of reinforcements to replace the losses at Montauban and Trones Wood.  The Jewry Roll indicates Maurice was appointed Lance Corporal, although this may have been unpaid intitially.

Maurice took part in the assault on Guillemont, assembling overnight on 29th July and advancing in the second wave of the assault, in the misty dawn of the next morning.  Records show he was originally posted missing and then his status was “presumed dead” at some point in 1917.

Maurice’s original burial was not in the area of the Battalion’s attack and he was most likely collected by burial parties two months after his death, when the German Army was finally levered out of the village.  The Missing status would not have continued for a man with a known grave, which supports a theory that Maurice was buried some time later, or possibly buried by the Germans.  His service record shows that one of his Identity Discs had been recovered, but not the date. 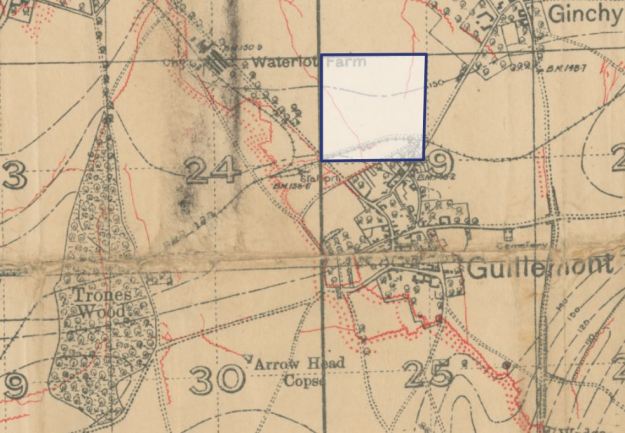 Soldiers Effects records show Abraham received his son’s estate, including a War Gratuity of £3.  The Medal Roll confirms Abraham will have received a Victory Medal and British War Medal; but not a 1914/15 Star, for men embarking overseas before January 1916.  Maurice’s sister Rachel subsequently received his Pension until 1926.  Maurice is commemorated on the Manchester Great Synagogue in Cheetham.

Records have been found that indicate Maurice’s sister Carrie Annie named her second son Maurice.  She had married in North Manchester Synagogue in 1914. Carrie’s home address was 18 Woodland Terrace, Broughton.  More data may be found from family records. 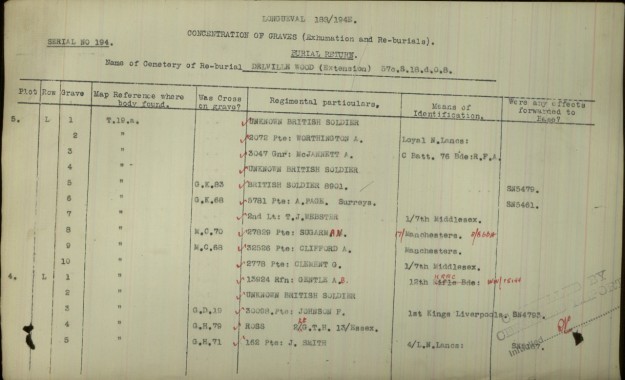 Maurice’s elder brother David Sugarman enlisted in the Royal Army Medical Corps on 1st June 1915.  There is no evidence David served overseas and he was discharged sick / wounded as a Private 357371 on 4th June 1919.  He returned to his parents home and received an Army Pension for Disorderly Action of the Heart and flat feet.

The youngest son in the family was known as Simon and Sydney.  He had been an Electrician when he enlisted as Private J/1562 in the Royal Fusiliers 23rd (Jewish) Battalion on 2nd January 1918.  He trained in England with 38th Bttn and served in Egypt with 40th Bttn from 28th August 1918.  Simon transferred to 17th Bttn and the Army of Occupation in Germany in August 1919.  Simon was discharged as a Sergeant, with throat and nose problems on 7th January 1920.