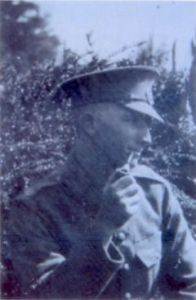 My grandfather was the only volunteer from the Platoon to assist with the rescue with the Lieutenant; who was known as “Jockey” Miller.  He recounted:-
“The Lieutenant must have known where to look, for we got to the Sergt. Major without much trouble.  He was quite unconscious, hit in the face an elsewhere.  Nearby were some South African soldiers and one of them volunteered to help to carry the S.M. back to our lines. ”

Walter Giddy of the 2nd South African Infantry recounted:-
“We heard cries from the wood further down, and Geoghan and Edkins went to investigate, finding three wounded men lying down in the open. They had been lying there three days among their own dead, and had been buried a couple of times by their own shells, and the one brought in had been wounded again. They asked for four volunteers to bring in the other two, so off we went. It was an awful half hour, but we were well repaid by the grateful looks on their haggard faces.”

“Jockey” Miller was killed on 29th July after receiving a grateful letter from CSM Johnson’s father:-
“‘In his [Ralph Miller’s] last letter home he enclosed a very touching letter from the father of his Sergeant-Major, who wrote to thank him for saving his son from certain death after he had lain

helpless in “No Man’s Land.”  In it the writer [Thomas Johnson] says: “We do want to tell you, for him and for ourselves, that your name will be often on our lips and always in our hearts.  Thanks are poor, inadequate things for such service as you have rendered us, but we feel that the circumstances entitle us at least to count ourselves among those who are privileged to pray that you may go through safely and be restored to your own people whole and sound.’ (Courtesy Glenalmond College)

I was pleased to meet Ralph Miller’s neace who provided a great photo of her Uncle.  I also showed her my grandad’s notes showing his respect for the young officer:-
“Brave Jockey!  Not many days after that came the report that he had got a gas shell ‘all to himself’ – killed of course.  Would he have been one of Shakespeare’s  ‘Even in the cannon’s mouth men’?”