A grand day out with family and friends commemorating the men from both sides of the Line who fought, died or survived in our footsteps 1oo years before.  Lest we forget.

A Manchester Pal’s Grandson, Grandaughter and her chap 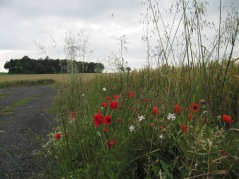 A pipe band troop past with some French veterans and local dignitories.

Two Grandsons, a Great nephew and a great grandaughter at the position of Triangle Point 100 years later than Arthur Bell

Two Grandsons, a Great nephew and a great grandaughter at the Pals Memorial

German group in the sunken lane approaching Montauban. Remembering all the losses at Montauban.