German postcard thought to be Montauban Church in Winter 1915/16

This German postcard shows a church in winter time and a pencil note on the back says Montauban.  Therefore it’s likely this is the village church in the Winter of 1915/16.

The 17th Battalion Manchester Regiment were based in trenches a mile south of Montauban near the village of Maricourt.  On this day 100 years ago the men could have peeked over the parapet to see the shell-damaged church on the distant ridge.   It will be seen this was no a good idea.

On 16th January 1916 the 17th Battalion were relieved after their first tour of the Maricourt defences.  The 16th Manchester took over their positions as the 17th withdrew to Suzanne. Maricourt Defences

On 1st July 1916 the Manchesters and other men of 30th Division liberated Montauban.  After the week-long British and French bombardment there was little left of the village and the Church had been flattened.

The 17th Manchesters repeatedly served in these trenches and suffered the cold, wet and German bombardments.  Private John Pownall Holt was the first casualty in Suzanne and 2nd Lieutenant William Russel Tonge was killed on 12th January.  His body was never recovered due to the terrible conditions in the trenches and he remains buried in an unknown place near Maricourt Wood.  Reports tell us William was killed by a sniper.  There were few subsequent losses due to snipers as the men will have learned not to look out at the church on the hill, or other surrounding features. 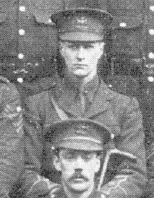