Following further twittering, here’s some photos for Flis & Pamela.  Their Grandad Ernest Hawksworth served with 17th Manchesters.  He is thought to have been wounded in arm near Sanctuary Wood Ypres on 31st July 1917 and also suffered gas poisoning.  Prior to hostilities, Ernest was employed by Brookfield Aichison & Co.

Ernest Hawksworth  and his future wife Annie Holland or maybe younger brother Samuel with one of the four sisters. May also be Annie with a brother.  Courtesy Ernest’s grandaughter Pamela Collings.  Ernest was born in November 1895 and christened at St Luke’s Church Miles Platting.

IV Platoon, 17th Battalion Manchester Regiment.  Not sure where Ernest is positioned. 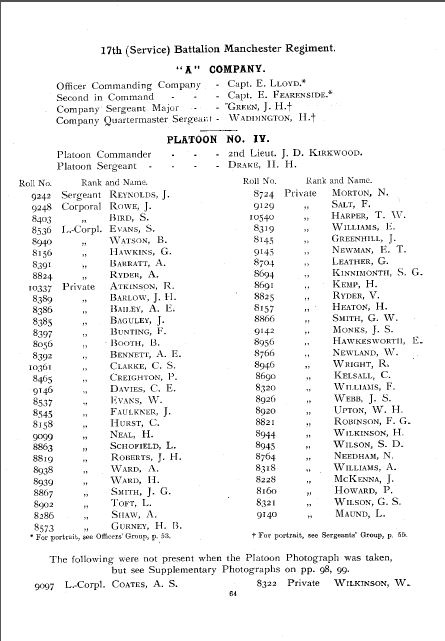 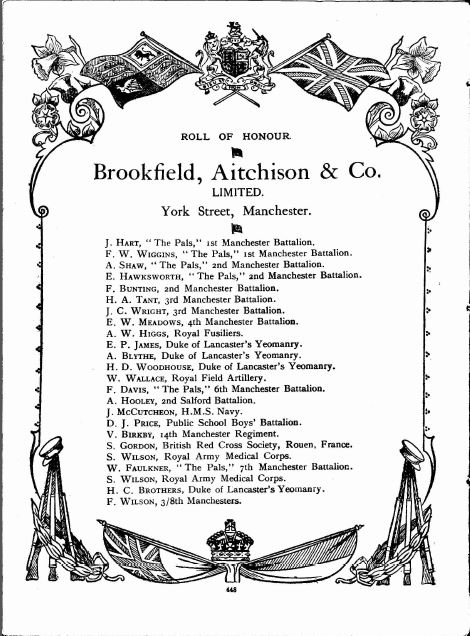 Brookfield Aichison Roll of Honour.  Ernest enlisted with 8286 A. Shaw (Demob May 1919) & Warehouseman 8397 Frank Bunting (Discharged unfit 6/2/1918 aged 23)  Frank was shot in the shoulder at Montauban on 1st July 1916 and after recovery he was shot again at Heninel on 23rd April 1917.  The three Pals survived.  Frank’s record specifies his enlistment on 3rd September 1914.  As the three men from the firm stayed together through training, it is likely they enlisted together on the second day of of recruitment for the 2nd City Battalion.