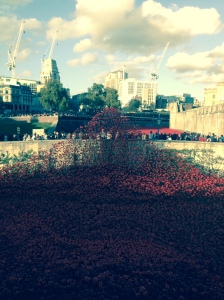 The poppies in the Tower of London, my family visit to the Warhorse show and BBC’s Our World War series have provided a resounding success in recognising the anniversary of the Great War. As a WWI researcher, it’s been easy to find fault in publications or programmes. In an effort to avoid being sniffy, I concluded that it was best to accept the spirit on these media and appreciate that the current generation of British people are engaging with the subject on numerous levels. This piece reflects on the direction of the media’s presentation.
The buffeting from crowds of people walking through the City of London on a Saturday afternoon in November confirmed our society’s continuing recognition of the War. I visited with one of my daughters to see Alfred Ridge’s Poppy in the sea of 888,246 and I imagine other people had their own agendas, or were solely spectators. As a football fan, I know the common spirit of a crowd – or indeed a mob – and found 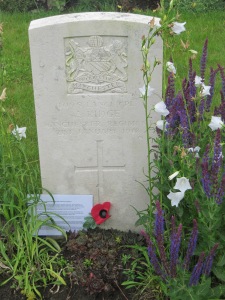 the effervescent Poppy experience unforgettable.
Further unreserved Anniversary success was the digitisation of records and fresh publication on line. Archive material from numerous sources can now be accessed at relatively low cost. Highlights for 17th Manchesters research in 2014 have been Red Cross Prisoner of War ICRC Digitised Records War Office Medal Rolls; Soldiers Wills for some men; War Diaries at the National Archive; extended data available on the Commonwealth War Grave Commission CWGC site.
As we approach the second year of Centenary and anticipating the Anniversary of the Battle of the Somme in July 2016, some reservations are developing.
The first is the romanticisation or of war. The remarkable story of the 1914 Christmas truce have been lost to popularisation of the media’s obsession with football – particularly the controversial Sainsbury’s advert and factually incorrect dreams. No confirmed sources indicate there was any pretence of a match between German and British troops. There was a kick-about in at least two locations, but the shaking of hands, sharing food & drink and genuine shared experience of a temporary peace are the principle issues that should be remembered.
The second concern is the application of 2014 moral values on our ancestors. I watched the Private Peaceful play with my family and found the presentation of war horrors to be well balanced with the plot associated with a Shot at Dawn (SaD) case. The engagement of the audience was remarkable for itself, but particularly with the number of Primary School age children and teenagers who were engaged throughout.
Regrettably SaD cases seem to be highlighted in every other media opportunity e.g. The Village & Our World War. I accept this is an issue for moral interpretation and I have specific regret and sadness for the three men of the 18th Manchesters who were executed for cowardice. However I feel this 2014 moral question now eclipses the principal issues of hostilities. My grandfather was wounded leaving the same trenches, on the day one of the 18th Battalion SaD men absented himself from duty at Flers. Rather than judging the SaD morality, I always feel the slaughter of hundreds of men on that day may have been a little more significant at the time. Let’s also remember 8135 Harry Evans who was killed that day, along with Grandfather’s School friend 8132 Leonard Edmondson; his neighbour 8241 Alec Mitchell and 8474 Hubert Craig who had served in III Platoon with Grandad since 1914 Anniversary 12th October 1916. I realise the personal connection with these casualties relates to a specific private interest. However, I see no media reflection on the scale of casualties.
Thankfully the troops returning from Afghanistan are contributing to a clear media presentation of the true factors of warfare and the recent casualties in our immediate consciousness. Kajaki is shocking, heart-warming but painful to watch, and should be compulsory viewing for GCSE students – particularly those considering a career in politics.
There seems to be no equivalent presentation of WWI. There may be a inadvertent conspiracy to focus on palatable issues or politically correct questions at cost of avoiding the enormity and horror of trench warfare. I have seen some incredibly vivid photographs of dead soldiers in the Western Front. My choice to avoid publishing may be missing some very moving material out of respect for the men concerned. However I reflect on the prospect that I’m also making the unpalatable nature of warfare more accessible.
Not wishing to be getting ahead of the media, here’s thoughts on four deaths on the Somme recounted by Scout Sergeant Bert Payne in his interviews with Lyn E Smith. Payne James Albert IWM interview In an effort to portray a more comprehensive picture, these events are now added to the static content on the site. 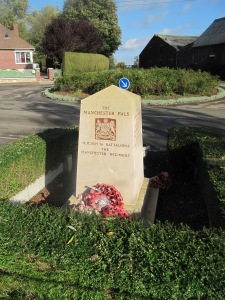 Bert served in the 16th Manchesters in Maricourt and was wounded in the First Day of the Somme at Montauban. These places and events are almost the same as the experiences of the 17th Battalion.
Bert first describes the uncomfortable delay in recovering the body of Corporal Pickering after he had been blown out of an Observation Point onto the wire near Maricourt. He then reported the losses in the advance Montauban. “I had a boy with me…out of school for six weeks…He said ‘…I’ve arrived today’ I said ‘Hang on to me.’…He was killed. Shot down next to me”
Bert Payne was wounded in the last dash up into the village. He was hit in the face by enfilade machine gun fire “There was a big shell hole full of dead and dying and blinded. It seemed to me to be a tall man got it through the jaw. A shorter man got it through the eyes.” After recovering consciousness Bert made a temporary dressing for his wound and made his way to the rear with Corporal Bill Brock, who had been shot through the foot.
On the way back over the hard fought battlefield, Bert and Bill came across a British Soldier with terrible wounds. “ A shell had come over and hit this man. Knocked off his left arm. Knocked off his left leg. His left eye was hanging on his cheek and he was calling out for Annie… So I shot him… But it hurt me. …He was just anybody’s boy. He was calling out for Annie…His eye was hanging out pulsing. I had to shoot him… Nobody could have done anything for him. He would have died in any case. I had the courage to do it.”
Later in the interview Bert mentions his repeated thoughts about his part in the death of the young man. It clearly made a deep impression on him and probably contributed to his response to a captured German Medical Officer he came across soon after. I asked this Doctor to bind the Corporal’s foot up and he wouldn’t. I told to do it or I’d shoot him…he said ‘Blame your own government.’ He refused to bind his foot so I shot him.”
These four deaths are not comfortable to address and any interpretation relate to the complete picture and context of hostilities. Following the confused assessment of a kick about at Christmas it may be best to leave the matter for personal interpretation and not the media. However, at the end of this Anniversary year, we will must not forget unpalatable aspects of death and maiming. The generation of men that returned mainly chose not to speak about their experiences. Thanks to Bert Payne and Arthur Bell we do have some first-hand experience that we can hear. Let’s hope the media don’t fail to listen.

Notes
6330 James Albert Payne went on to live a full life being interviewed in his 94 year. After a long period of recovery he worked then worked in a Military Hospital and was discharged with a Silver War Badge in March 1918, aged 24. Bert has been one of the first to enlist in the Pals in August 1914.
Two brothers Horace and Reginald Pickering had enlisted in August 1914 and served together. Lance Corporal Horace Pickering was killed in May 1916. One can imagine the anguish of his friends and brother when Horace’s body remained above their trench, but unavailable until nightfall. Horace was buried alongside Lance Corporal Charles Johnston-who had been killed in the same bombardment- in Maricourt Military Cemetery. Their remains were relocated to Cerisey-Gailly in 1920. Brother Reg had been a singer and entertained the troops with his tenor voice. He was later wounded and returned Home, where he looked for work in music.
William Priestley Brock later transferred to the Labour Corps where he was transferred fit to reserve in March 1919. 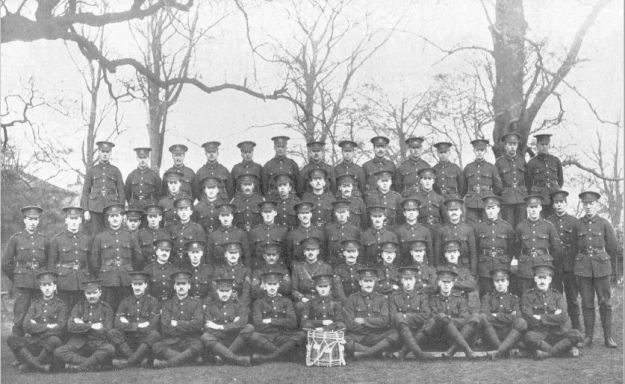 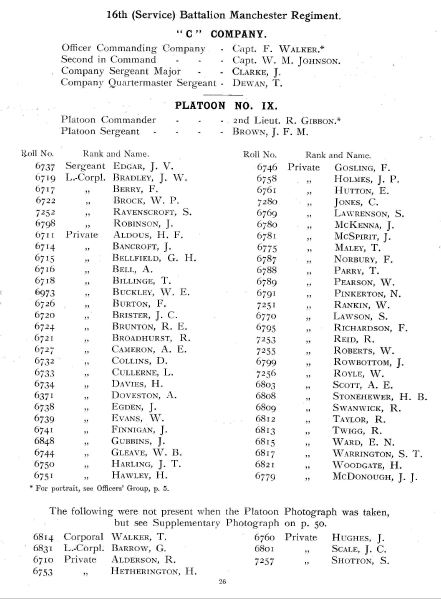