We’re looking for a surviving family member of Lance Sergeant Henry Kay Evans.  Known by his family as Harry,  he was a 17th Bttn. casualty at Flers on 12th October 1916.  Born Levenshulme.  Killed in Action. Aged 28 Son of Thomas W. and Agnes Evans, of 28, Ashwood Avenue, West Didsbury, Manchester. Trained with IX Platoon of  “C” Coy. Educated at Manchester Grammar 1900-04, where he was am member of the Gym VIII.  Played football for the YMCA and Berry’s. Father Thomas William Evans, General Manager of the Manchester Evening News (1901-1929).  He is buried in A.I.F. FLERS Henry was mentioned in the Official History as part of a machine gun crew that did good work at Montauban. .

Jon Stack was a very welcome visitor to the GUEST BOOK section of this site.  Jon has inherited two letters to Harry Evans mother.  They were stored in a small bible, likely to have belonged to Harry and carried with him on the Somme.  Jon is enthusiastic to return these treasures to a suitable family member.  From the perspective of the Battalion History, the letter record one family’s loss, but also a little more explanation on the circumstances of C Company’s roll – with A Company following – in the disastrous assault on Flers.

The letters from 90th Brigade Padre Robert Balleine were quite commonplace and perhaps a little standardised.   This included a similar letter to  Ralph Miller‘s father.  The return of the pay book and photographs were probably Harry’s only possessions, indicating the Bible had not belonged to him, or was not taken with him to the front.

The second letter was sent to Harry’s mother and father on 18th October, six days after his death.  It was sent by Harry’s Pal, 8976 Private Arthur Wilkinson.  Arthur had trained in XI Pln of C Company. 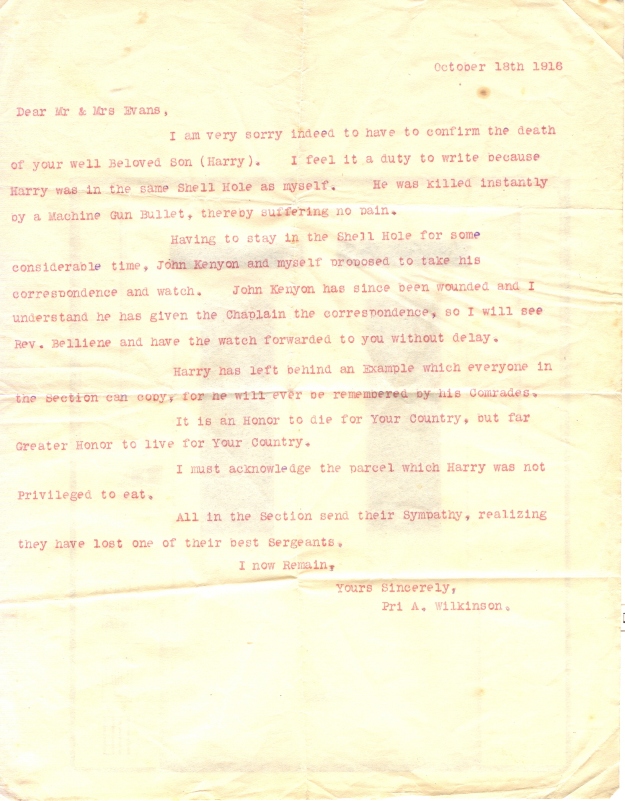 C Company occupied the right flank in the Battalion’s assault at Flers.  Two Companies advanced followed by the two remaining Companies in the second wave.  They were then followed by the first two Companies of A Company, before CSM Ham stopped the stalled advance before the second two companies of A Company went over the top.  It is recorded that the men were mown down by machine gun fire, advancing no more than 50 yards.

In the context of the War Diary and other records, it is assumed that Arthur Wilkinson, John Kenyon (of IX Pln) and Harry Evans went over the top and made some progress forward before sheltering from the storm of machine gun fire in a shell hole.  Arthur and John were awarded Military Medals in January 1917, most likely associated with their action in the shell hole at Flers.  Harry was clearly part of this action.

Manchester Evening News 13.4.17 Thanks to Atherton of MRF

John Kenyon returned to the UK after the reported wounds.  The Lord Mayor awarded his Military Medal in a ceremony in April 1917.  He was discharged fit for duty in April 1919.

Arthur Wilkinson was less fortunate, being fatally wounded at Heninel in April 1917.

It is interesting to note former Manchester Grammar School Master, Captain Brown was Harry, Arthur and John’s OC.  It is doubtful there was a direct connection, although the active Old Boys network would suggest the two men would have been known to each other.  Captain Macdonald Warriner Brown is commemorated at Thiepval.

Returning to the machine gun crew at Montauban, the gun remained at work until the Battalion was relieved.  In addition to Harry (Henry) Kay, the gun was manned by Privates Clough, Gordon, Worthington & Wright.  As can be seen below, Harry Evans had been employed by Barlow & Jones and it appears he had enlisted with O. Clough.  8102 Oswald Clough had trained with Harry in IX Platoon and later transferred to the Royal Engineers and Labour Corps. 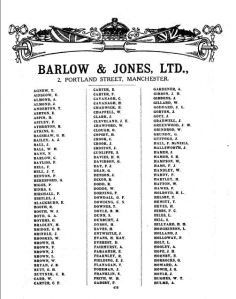