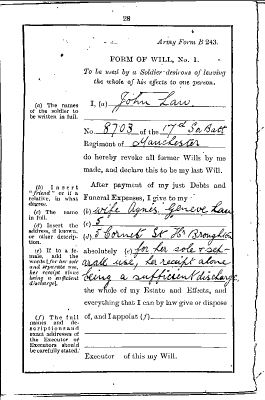 Her Majesty’s Court & Tribunal Service (HMCTS) in conjunction with a private company has published many wills of men who lost their lives in World War I https://probatesearch.service.gov.uk/ I acknowledge Crown Copyright to the images on this post.

In some cases the wills incorporate ‘last letters’ to family members, providing vital new information on the thoughts, wishes and facts on many men who served and died.  In most instances, the papers had been carried with the troops in their last fatal battles.

The database has bean searched for the men of III Platoon of 17th Battalion Manchester Regiment and other men that are referred to on this site.  Out of approximately 60 searches, only two wills have been identified.  This reflects the loss of men on the battle field and the limited number of men who recorded their last wishes in this way.

The first Will to be found belonged to   8703 Private John Law who was one of the Casualties 9th / 10th July 1916 at Trones Wood.  These private documents produce important information that help maintain remembrance of the lost young men.  In John Law’s case we can now see he was married to Agnes and lived at Cornet Street, Higher Broughton in Salford.

As yet, I have been unable to identify further records from this data.  It’s interesting to note John’s Will was accepted without signature or date.

William Chant is the second member of III Platoon whose Will has been found.  William’s service record has previously been identified.  This provides quite a lot of background to his service, wounding at Flers in October 1916 and associated death from septicemia at a Glasgow Hospital in April 1917.  It’s poignant to see William’s letter – bequeathing all property to his mother – is dated 10th November 1915; a few days after his arrival in France.