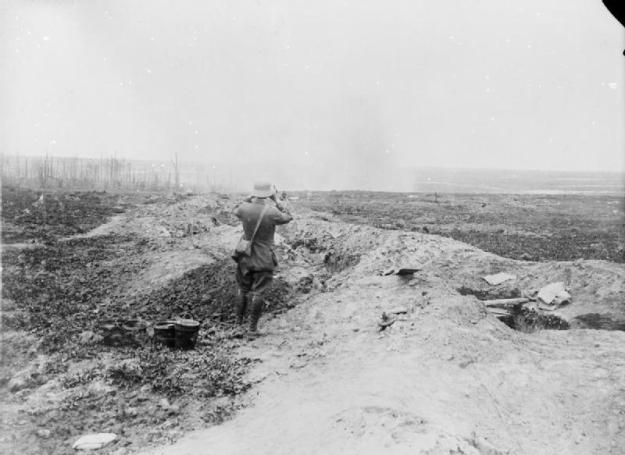 I’ve posted this photo in the Guillemont section of the site, although I’m not sure where this German observer is standing or looking.  https://17thmanchesters.wordpress.com/guillemont/

We can see the wood is to the side of the bombardment which is described as British and the photo was taken in August 1916.  Trones Wood together with the area west and immediately south of it was held by the British by August.  It follows the observer must be south east and the British shells must be falling east of the wood.

The wood appears quite close and a little downhill from the observer, which suggests the German soldier may have been near Maltz Horn Farm.  Should this be the case, the trench would be Maltz Horn trench.  This area was taken by British forces in early August.  I still can’t work out why the bombardment would appear to have been falling so close to the wood.

I am planning a trip in July and will try to take a contemporary photo of the same view.  If any posters have other ideas, please leave a comment